SDN staff in London and Port Harcourt have been working hard over previous months preparing for and monitoring the Presidential and Local Government Elections in the southern states of the Niger Delta. It has been a busy few months for all of us and here we share the fruits of our labour during the 2015 election season.

Working with partners On Our Radar, USHAHIDI, the Yar’Adua Foundation and an array of local and international connections we have been informing, mapping, analysing, monitoring and reporting on the 2015 election season in the Niger Delta using our Niger Delta Watch platform. Coupled with this our team in Port Harcourt has been mobilising local communities and putting the issues on the media and political agenda through radio round-table discussions and phone-ins.

The Governorship and State Assembly elections in Rivers State on April 11 2015 are unlikely to be widely accepted as credible. Official turnouts at an LGA and ward level ranging as high as 95-99% stood in stark contrast to observations made on election day.

The poll in Rivers State were marred by violence and disruption with over 470,000 registered voters denied the chance to vote due to official cancellations. Many more stayed away from the polls due to well justified fears of violence.

Violence had a serious impact on voters, election officials, and party supporters. Significant efforts by INEC and Police to improve security and election processes were simply overwhelmed by the breadth of violence and intimidation. Election officials were assaulted and abducted in incidents across the state and they often faced intolerable pressures from political actors INEC’s efforts were further complicated by a breakdown in relations with the APC whose protests delayed and disrupted polls in many parts of the state.

Parts of the state which were more closely observed such as Port Harcourt Local Government saw noticeable improvement in conduct. Card readers were used with only minor problems, voting seemed normal, and there was reasonable collation. However, these areas were swamped by those which returned massive official results that were both implausible and extraordinarily one sided.

The failure to establish credible polls in Rivers state underlines the challenge that INEC faces in supporting free elections in states where political actors can use extraordinary amounts of cash to sponsor political violence, intimidation of both voters and officials, and the manipulation of polls. The outcome in Rivers demands that INEC swiftly releases all available data on the results of the poll, so that areas of most obvious abuse will not be rewarded with silence. It should follow up existing recommendations from the EU and others to investigate the polls as a matter of urgency.

Reports on presidential elections in Bayelsa, Rivers and Delta State

SDN’s election observation teams in the Niger Delta were out in force for the presidential elections on March 28th. Download the summary observation reports and recommendations below.

FLASHPOINTS: News and analysis leading up to the 2015 elections in Nigeria

With election observers and citizen reporters on the ground we will bring together a wide range of information, news, analysis and incident reports on the upcoming elections over the coming weeks. Whether you are local Nigerian or an international observer – stay tuned…. 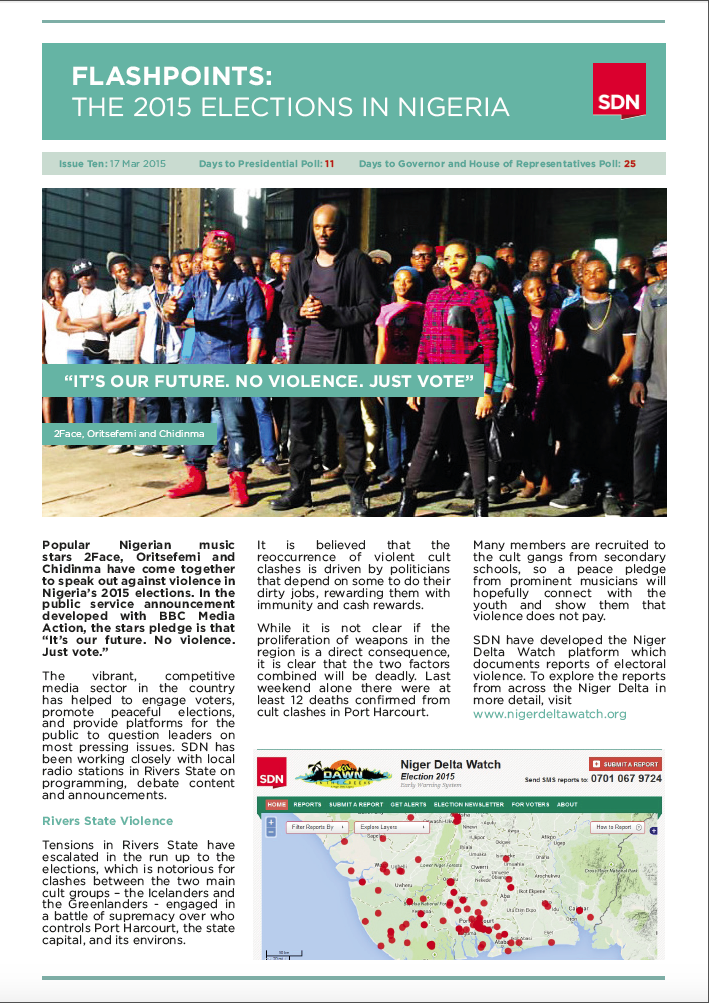 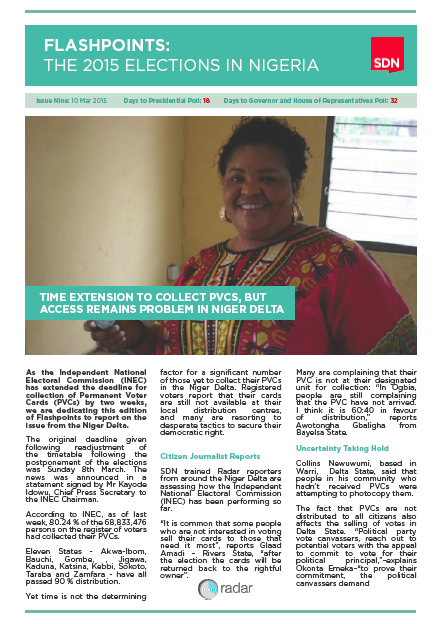